In 1913, the unfamiliar sounds of The Rite of Spring were enough to ignite rage and rioting in a passionate public. 100 years later, prompted by recent riots, the cast of 100 dancers in RIOT Offspring explore their own perceptions of rites, rituals and riots, creating a powerful piece of dance theatre.

As part of a double bill with

RIOT Offspring - Behind the Scenes

The RIOT Offspring, Behind the Scenes documentary is now up on Sadler's Wells' Screen. Click here to view it, meet some of the cast members and find out more about the creative process:

Posted by Connect at Sadler's Wells at 08:35 No comments:

Posted by Connect at Sadler's Wells at 08:34 No comments:

Our London: (In Between) Riot Offspring At Sadler’s Wells

Posted on June 18, 2013 by Jane
As you all know Von Einhorn and I are big supporters of the arts. Anyway you can imagine how delighted we were to find out that on the 8th June there was another community show on at Sadler’s Wells by creative producer Jane Hackett and her team. The National Youth Dance Company performed ‘In Between’ first. It was a very energetic, creative piece, and you have to marvel at the amazing skills of the young dancers, incredible. I just hope there are enough opportunities for them all to continue their amazing craft. (Arts Council are you listening?)
Next came Riot Offspring using one of my particular favourite pieces of music Stravinsky’s The Rite of Spring with a REAL orchestra, (South Bank Sinfonia) wonderful, especially for all the people taking part and for us the music was spectacular, very exciting.

These community shows are always amazing because they allow people who normally wouldn’t be included in something as grand as a performance at Sadler’s Wells to take part in something creative with loads of different age groups that they may not necessarily mix with socially. They all work together and at the same time get a great sense of belonging and being part of something big. It’s hard for us to evaluate just how important this is to participants but I suspect that the main product of all these projects is a growth of confidence, in oneself and in others.
There were representatives from all age groups including one participant of 92. Also a great opportunity for some young mothers and their babies to be included in something, it can be very isolating to have a small child and your identity as a person can feel as if it has got a bit subsumed.
Here they were doing something very out of the ordinary, and interacting with a very creative bunch of people from totally different worlds. You get the feeling watching all the different groups working together that the performance is really only a small part of this project and they must have all had a great time during the long months of workshops, working with the 5 very different choreographers.
These sorts of projects should be available in every community for every age group to be able to take part in. We loved seeing the tiny babies being carried on to the stage (I love babies but Von Einhorn finds them disruptive, I don’t think he has a soul).
The performance as always was exciting and inspiring. The staging was wonderful, we particularly liked all the newspaper, very imaginative. This was a proper production with professional production values, there was nothing condescending about it in any way. Von Einhorn kept muttering about recycling of newspaper, sometimes I think his attention span leaves a lot to be desired. Maybe we will encourage him to take part in the next production, it may stop him fidgeting so much.
Posted by Connect at Sadler's Wells at 01:59 No comments:

Take a cast of hundreds, add in an iconic performance one hundred years ago, stir and bring to the boil and what do you get?  A fabulous evening at Sadler’s Wells that gives a whole new meaning to the word `community-based’.
Many arts companies pay lip service to working `with the community’.  But Sadler’s Wells really put their money where their mouth is.  Nothing about this double-bill that included the inaugural performance by the recently formed National Youth Dance Company with the wittily entitled response to Stravinsky’s Rite of Spring, celebrating one hundred years since its stormy premiere, was thread-bare or patronising.  From the printed programme, through to the lighting, choreography and not least the dancers, this was an evening to treasure.
Jasmin Vardimon’s (in between) for the NYDC (it has two more performances at Sadler’s Wells at the end of June and then goes on tour, see below for details), combined elasticity with a profound sense of violence, both environmental and human.  Against a woodland setting of silver pines, the young dancers of NYDC stood and swayed atop half chopped logs.  Arms billowing, bodies curling and uncurling, Vardimon’s choreography was all flow, soft, undulating, simple.
All the more shattering then as two of the company peeled off and like woodcutters, felled each tree/person accompanied by ear-piercing yells.  Yet growth would not be stifled.  Vardimon seemed to be showing us aggression, rebirth and the collective spirit living side by side with a choreography that not only emphasised the suppleness of her young group, drawn from all over the country and together as a group for less than a month, but their collective strength.
A terrific debut, the Riot Offspring that followed opened with tiny tots tip-toeing through mounds of paper leaves and, involving Sadler’s Wells’ own Company of Elders, teenagers from their Mimbre Youth Company, Inspire and Emerging Artists companies, climaxed in the ritual sacrifice that Stravinsky’s Rite of Spring demands.  But this was a Rite for Today; youngsters with white face masks and white boiler suits squaring up to each other echoing recent urban riots whilst a great phalanx of elders lifted arms to heaven as if in supplication.
Again, the choreography by five choreographers – Ivan Blackstock, Mafalda Deville, Pascal Merighi, Simeon Qsyea and Sébastien Ramirez – showed young bodies off in their full lithe capacities, contrasted this time even more poignantly by their older, stiffer compatriots and the stumbling first steps of some barely out of their mothers’ arms.
Accompanied live by the wonderfully exhilarating – and again, young – Southbank Sinfonia under Gerry Cornelius, this was a community dance performance to make the heart pound and blood surge.  What more could you ask of a rite of spring?
Further NYDC performances of (in between) are June 28/29 at Sadler’s Wells; June 30 at JV Production Space, Ashford, July 20 at West Yorkshire Playhouse, Leeds; July 21 at The Lowry, Salford and July 28 Bristol, part of the British Harbour Festival.
See more from www.sadlerswells.com.  The NYDC which is based at Sadler’s Wells is now recruiting for another 30 young dancers to join the company.
Email nydc@sadlers.com for more details.
Carole Woddis © June 9, 2013.
Posted by Connect at Sadler's Wells at 01:56 No comments:

Two performances which harnessed young energy and creativity, from the calm and reflective (in-between ) to the explosive RIOT Offspring , made for a Saturday night full of vitality and was a tribute to the many people involved.
The premiere of National Youth Dance Company’s ( in between ) by their first Guest Artistic Director Jasmin Vardimon is an impressive display of team work as well as individual skill. Thirty teenagers from a variety of dance and cultural backgrounds find common ground in simple strategies like shared breathing and the rhythms breath can generate. The result is a noisy but fluid and deeply connected performance. Vardimon works with the theme of a forest, the felling and re-generation of trees – a fitting idea for environmentally switched-on young people.
Against a backdrop of a towering forest, the dancers balance on tree stumps, swaying and gesturing with their arms. Two angry men cut them down, until they are all felled – even the woman with Rapunzel-like hair who repeatedly returns to her stump in defiance. Bauschian repetition and the utilisation of sequences performed in a chorus formation, create a gratifying tension and powerful suspense. Although a state of meditative calm is brought about by the sound of the dancers breathing and wafting their arms, like the wind sighing through trees, the quality changes to one that is more thrusting and percussive as the ‘spirits’ of the trees re-group and reclaim their roots.
RIOT Offspring which is the community project offering to celebrate the centenary of Igor Stravinsky’s Rite of Spring, pays further testament to the virtues of team work, with 100 dancers, from between the spectrum of amateur and emerging artist, five choreographers [Sébastian Ramirez, Mafalda Deville, Pascal Merighi (guest artist, Tanztheater Wuppertal Pina Bausch), Ivan Blackstock and Simeon Qsyea (BirdGang)] and theSouthbank Sinfonia. What the creative team do so effectively here is to show the interaction between different generations, the mature Company of Elders, children from the local community, teenage mums and babies and emerging artists as they explore their reactions to London’s 2011 summer riots.
Children buried under shredded paper unfurl their bodies and emerge slowly as tiny tots tip-toe over the debris. The elders calmly arrive to meet them with gentle and embracing movements, a presence of stability and wisdom. Then to the first ominous random beats and repeated discords of Stravinsky’s famous music score, the young people swirl on stage in their numbers, all anger and angularity. Each have their own style of moving, some are hip hop experts, others athletic or balletic, but each performs to his or her eclectic strengths. While they break out in attitude-fueled solos, some of the most effective choreography is in the unison. The young dancers form long lines and undulate through their bodies, sending rippling Mexican waves through the crowds, either standing or lying on the floor or travelling across it. It’s a strong spectacle, that of all 100 performers on stage together, staggered spatially on different levels.
Amidst the rampage and aggressive confrontations between the young people there are touching moments such as when the elders, quietly assertive, softly pursue the stampeding teenagers. Or when a young mother patiently helps her toddler walk over the backs of the crouching youth, as they form boundary lines across the stage. A reminder that innocence exists in the most unlikely situations.
The climactic ending is memorable: the frenzied teenagers run in a huge circle around the victims, then suddenly cluster around them in a mob. After repeating this sequence several times they close in and, joined by the the whole cast, form a human pyre which agnites as leaping flames are projected onto it.
Josephine Leask is a lecturer in Cultural Studies on the BA (Hons) degree course at the London Studio Centre and London correspondent for The Dance Insider.
Photos: Bettina Strenske
Posted by Connect at Sadler's Wells at 01:55 No comments: 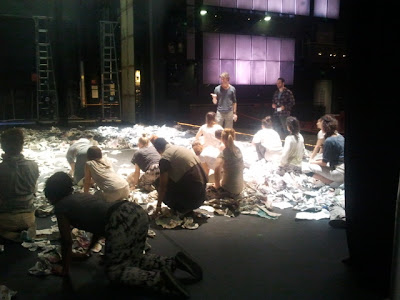 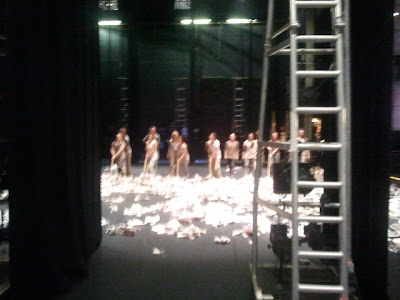 Posted by Connect at Sadler's Wells at 02:50 No comments:

Posted by Connect at Sadler's Wells at 04:58 No comments:

Welcome to the official blogspot for RIOT OFFSPRING, this blog will follow the participants and their experiences during the creative process of this project, through diary entries, photos and video clips.